He is the 4th-year medical student, born in 1997, studying since 2014 at the Universidad de San Carlos de Guatemala in Guatemala, who has been awarded with the 7th GA Scholarship in the history of our Fund  to travel to Slovenia for the IFMSA General Assembly – March Meeting 2019 representing his country and ASOCEM-Guatemala, of which he is the current National Officer on Human Rights and Peace (NORP).

Daniel was chosen among 43 applicants for the scholarship, according to his background, expertise and motivation. The amount of €500 of scholarship money has partially covered Daniel’s expenses for registering and traveling to the MM2019 in Slovenia to meet with friends and colleagues studying Medicine from all over the world!

Learn more about Daniel, by reading through his CV, as well as his Letter of Motivation.

Expectations and goals in IFMSA: to become part of the IT of SCORP & lead my NMO as President; I know I can do an outstanding job in these positions if I gain the necessary skills and knowledge, so I get enough experience in order to achieve great things for the IFMSA and my NMO. Also, take the opportunities of IFMSA in opening doors to other countries and international ONGs to work there in a near future.

About me: Young dreamer, passionate about service, leadership, empowerment and capacity building. Human Rights advocate. I cannot imagine a better, prosperous and just society for all its members without thinking beforehand about the respect and fulfillment of Human Rights. I firmly believe that a better world is possible if the new generations are willing to fight for it, and we as medical students are very important change agents. 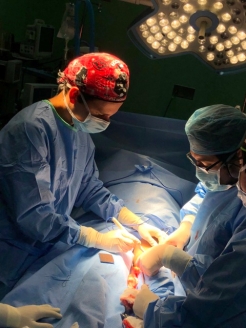 Daniel Sierra at a usual day in Med School in Guatemala

Daniel Sierra and his poster at the MM2019 in Slovenia

IFMSA has become a family for me. Working on the IFMSA has given me the best experiences, great lessons of life and a self-discovery platform where I have found my greatest skills. Even thought IFMSA Guatemala has grown a lot in the last three years, very few of our members have had the opportunity to attend a General Assembly, mainly due to economic situation. That’s why I’m writing this motivational letter, so it can be taken in account for the Professor Erik Holst Fund to attend the MM2019. Attending to the MM2019 would give me the opportunity to gain knowledge and skills to improve my work at the Team of Officials in my NMO.

My main motivation is: